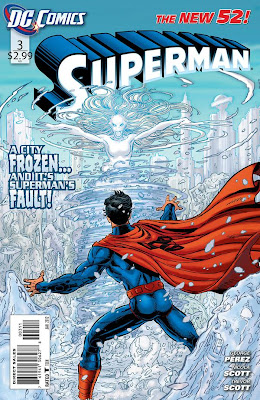 Read issues 3, 4 and 5 of the New 52 series of Superman. Over-all I've really enjoyed much of DC Comics line of rebooted books. Sure, there's the inexplicable fact that they have the worst comic artist of all time working on multiple comics. Besides for the Rob Liefeld factor though, I think that there are may more good worth-reading books than ones that are a waste of your valuable comic book reading time. I recommend Animal Man, Batman, All Star Western, I Vampire, Frankenstein Agent of SHADE, Action Comics and Batman & Robin.

Although the Superman comic is good, I just cannot get over his new costume. It's not a grand change from his traditional attire, it's not the train-wreck that was Superman's 1990's lightning bolt speed-skater costume, but Jim Lee's re-design bothers me. I know that super-heroes often get teased for the underwear on the outside of their pants thing, but Superman without the red underwear on the outside of his blue pants seems just wrong. It's like he was in a rush to get out the door to go and save the world and he forgot a piece of clothing. The Flash has never had the underwear accompaniment, and there's nothing wrong with his look, but Superman somehow seems all naked now. Cover yourself Man of Steel! There are children reading those comics! Well...actually, most comic readers are in their 20's to 40's...but kids might see pictures of New 52 universe Superman and be totally scarred for life!
Posted by batturtle at 11:56 PM