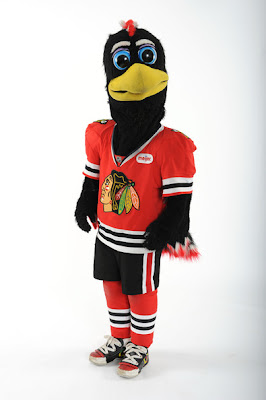 I got to go see another free hockey game last night, it seems that the less I have time to care about and follow the sport, the more free tickets come my way. Maybe I should care less and not have time to be independently wealthy and someone will give me a winning lotto ticket.

The game was the Senators vs the Blackhawks, Chicago won 2-1, was a pretty good game to watch though. I so don't follow hockey anymore, I didn't realize that one of my favorite former Senators, Ray Emery, is the goalie in Chicago. So in my lass half full stance, the home team lost, but at least it was a loss to a player that I have the Todd McFarlane (not really an) action figure of.

I was curious if the Blackhawks had a mascot, and if it was verging on possible racially inappropriate as their logo is. Their mascot is not indeed some foam headed Native American caricature, but just some goofy looking bird. So the mascot may be fairly lame, but at least it's not blatantly racist.

My favorite part of the night was when it was announced on the jumbo-tron that the coach of the Maple Leafs had been fired. Every single person in the audience cheered. We may be rivals on the rink, but it is nice that every hockey city in North America universally can join in comradery in their hatred of the city of Toronto and it's Maple Leafs.