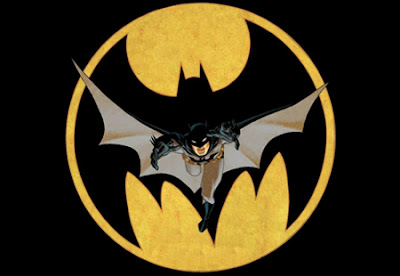 Don't know how it took so long for me to get around to it, but I finally watched the Batman: Year One animated film that came out late last year. I love Batman and I love DC's series of animated tv series and films, so my geek cred if shamefully hit by not dropping everything to view this film instantly on it's release to Blu Ray last October.

Warner Bros animation branch of DC Comics productions have been on an incredible run since the early 1990's. Starting with the Batman animated series, which lead into Superman, Batman Beyond and then Justice League, there was an uninterrupted run of excellent DC Universe animation on TV for some 15 years. Since 2007 or so they've been focusing more on stand-alone animated films with different voice actors and character designs, ranging from the 1950's set New Frontier, the anthology Gotham Knight, or the adaption of Grant Morrison and Frank Quietly's All Star Superman series.

Batman: Year One is an adaptation of issues #404 through #407 of Batman, written by Frank Miller (before he went crazy) and illustrated by David Mazzucchelli, published in 1987. An original concept at the time that has inspired endless Year One comic book prequel tales to follow. As I will always point out, because I am a comic book reverse snob, Batman: Year One was not and is not a graphic novel, it was four issues of the comic book series Batman. I hate the term graphic novel, no one says "I'm going to see a motion picture tonight", and I kind of find the term graphic novel equally pretentious.

Anyhow, back to the topic at hand...Batman: Year One is yet another example of Warner Bros animation being the front runner in not only traditional animation comic book adaptations, but in comic book stories from cartoon or live-action form. If I could only watch one version, I'd rather watch these cartoons than even my most favorite of live-action Batman's. The same stands for Superman stuff, except even with the excellent performance of Christopher Reeve, I don't think any live-action Superman film has been all the great. The cartoons are always better.

Batman: Year One clocks in at a tight 64 minutes (plus there's a cool Catwoman short tagged onto there too), and at a little over an hour tells a better story then movies twice it's length. Bryan Cranston takes a break from winning Emmy's for brilliantly portraying drug crime kingpin's in the making to play the polar opposite character of not Commissioner yet Jim Gordon. Some people don't think that voice acting counts as acting, but much like Kevin Conroy's frequent gig as Batman and Mark Hamill as Joker, Cranston out does even Gary Oldman in the portrayal of the character. Plus, the animation is beautiful, every time I see something like this it makes me wish that hand drawn animation was still at the powerhouse levels that it was at back in the 1990's. I love PIXAR and some of the live-action comic book inspired films, but to see comic books come to life, I think it needs to be done in a traditional animation style.

You want to see a really well done Batman story, you don't have to wait until the next Chris Nolan offering, just watch some cartoons.
Posted by batturtle at 11:54 PM