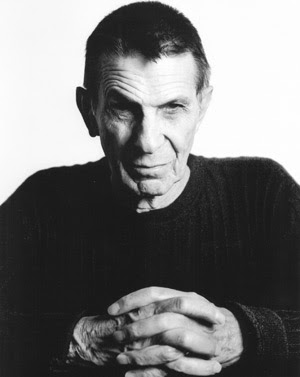 I've always been quite honoured to share a birthday with Leonard Nimoy. When I was a little kid, my Sunday morning tradition was to watch Star Trek on CBC with my dad, well before the age of sci-fi networks and Blu-Ray box sets. In fact, now that I'm thinking about it, the second movie that I ever saw was a drive-in screening of Star Trek: The Motion Picture (double-billed right after another lil' space epic called Star Wars). I watched every episode of Star Trek multiple times. I watched the excellent ones with time travel and Joan Collins, furry alien Tribbles and evil goatee Spock's...I watched all the not so excellent one's with space hippies and Spock losing his brain. And of course, Leonard Nimoy gave this silver screen it's greatest death scene of all time in Star Trek II: The Wrath of Khan. If it is a spoiler to you that Spock dies in the end of the 1982 film, may I also spoil for you that Darth Vader is Luke's dad, Rosebud is a sled, and that the guy in Crying Games is a chick.

It is a horrible cliche, but since he has accepted, embraced and seemed honoured himself to have the Spock character in his life, may I wish Mr. Nimoy a happy birthday and hope that he continues to live long and prosper.
Posted by batturtle at 3:23 PM