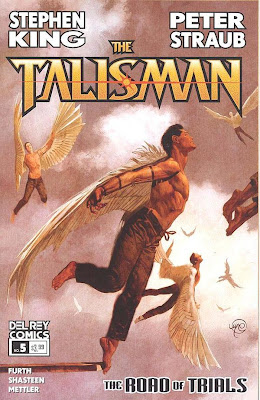 In 1982 there was a Creepshow comic written by Stephen King, featuring art by Bernie Wrightson (I think it was actually adapted and illustrated him), based on the anthology film directed by George A Romero. Sometime after that he wrote an introduction to Batman #400, and supplied a couple pages of story for an X-Men comic titled Heroes for Hope that was published as a fundraiser for African famine relief. I could swear that he also wrote a Batman comic in there somewhere, but I must have been hallucinating that 'cause I can find no evidence of that anywhere on the interwebs.

Then twenty-five years passed by, Stephen wrote a few dozen books, had a few dozen films produced based on his stories...but no more comics.

Then Marvel Comics teased a Stephen King partnership for a while, eventually announcing a new series of prequel comics stories featuring Roland Deschain in The Dark Tower universe. Although Stephen didn't write the new stories directly, he serves as Creative & Executive Director. It marked the first time that Stephen King supervised a spin-off of his work, joining film and TV franchises the likes of Star Wars, Star Trek, Buffy, etc, in detailing expanded histories with their characters in the comic book format.

In the success of Marvel's new Dark Tower tales, and Stephen King seeming to like the idea of his stories getting the comic book treatment all of a sudden, more adaptations soon followed. Marvel has published a number of comics set around the world of The Stand (which is also connected to the Dark Tower canon), and an adaptation of the novella titled N. And this year, IDW is putting out an adaptation of Road Rage, a story that Stephen wrote with his son Joe Hill. In 2010, he actually wrote half of the first story-arc for Vertigo Comics horror western American Vampire with Scott Snyder.

I just read the adaptation of The Talisman, the excellent epic fantasy from Stephen King and Peter Straub (which also ties into the Dark Tower universe!). The comic just doesn't fly, something didn't hit it's stride in it's transformation from words to words and pictures. The art isn't great, you're never really sure exactly what's going on, and it totally just hits a brick wall and ends. There's not even really an ending...except for the fact that the book stops having pages in it. So, as much as this goes against my usual instinct, in this case I would recommend reading the non-picture version of this story.