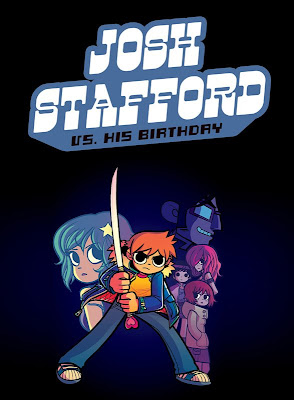 Yesterday I got my ninth pair of Converse and the Grant Morrison non-comic book amongst other lovely birthday gifts. I received a very hilarious Twilight birthday card, an inscribed book that got me all choked up, and that image above is a home-made card made by a very skilled and talented friend who goes by the name of Drunky. It was another memorable Mayfair night, we don't make any money running a theatre and it's a constant amount of work, but we do get perks like getting to pick an awesome movie to show for one's birthday. I will never ever get tired of watching Scott Pilgrim vs The World. Especially watching it after getting to watch some awesome trailers, in a theatre full of friends, some of whom are brandishing dollar-store Nerf like swords, with a few dozen cupcakes to eat. Then, as tradition dictates, the after-movie-party involved playing Mario Kart on the big screen. And yes, playing Mario Kart on the big screen is as cool as flying a jet-pack or being in a Fight Club with William Shatner. Tis a wonderful life.

Posted by batturtle at 3:58 PM