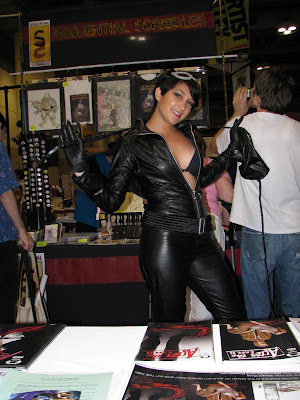 Catwoman (Darwyn Cooke style) at the Fan Expo
My friends, this image above is prime example number one why comic con's are awesome. This was the view from behind Howard Wong's table on Sunday afternoon at the Fan Expo. If you can pry your eyes away from Catwoman for a moment, you'll notice his 'After the Cape' comics there at the bottom of the picture (both trades currently available from Image Comics...go buy 'em now!) .

A fun weekend was had by all. I got to see a bunch of comic con friends and acquaintances, got a bit of schmoozing in, got to chat with some geeky heroes of mine the likes of (Commander) Rick Green, Keith Giffen, and the folks from Mirage Studios amongst others. And went see 'Evil Dead the Musical', which I'm pretty sure was the greatest thing ever produced by human beings in the history of the planet.

I filled up my second sketch book (well, exept for two pages that are on reserve for friends that I have to get in there). So, I'll get around to a scanner sooner or later and show off some of the new highlights of my collection soon.
Posted by batturtle at 3:45 PM No comments: