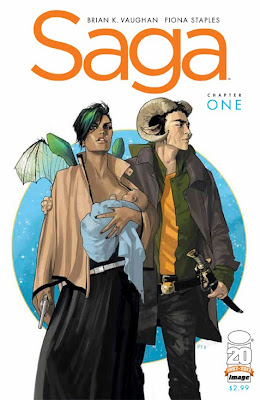 There hasn't been a comic that I've been anticipating as much as Saga for a very long time. An epic space opera love story about a young couple who come from either sides of an endless intergalactic war, they're newborn baby, and their attempts to survive.

It is written by Brian K Vaughan, who wrote two of my most beloved comic series in the past ten years, Y the Last Man and Runaways (he also worked on Lost and is adapting Stephen King's book Under the Dome into a TV series for Steven Spielberg). The art comes from Canadian super talent Fiona Staples. It is published by Image Comics, who in their 20th year impress me more & more with their over-all diversity in titles and level of talent that they are attracting to tackle creator owned work vs working for DC or Marvel.

Saga did not disappoint. I want to read more right now. But, as I am a traditionalist, I prefer reading the comic book in a monthly release format vs the wait for a collection option. I will have to impatiently wait for the next chapter in what in all likelihood is going to end up being another of my favorite comic book series ever.