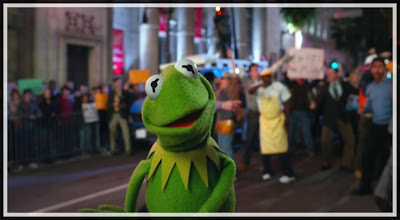 I promise to stop gushing about all things Muppets immediately after this posting, at least for the foreseeable future. Today I was working in the box office of the Mayfair for a matinee of The Muppets. There was a posse of young guys, around 9 or 10 years old or so all buying tickets for the show. The last kid of the group had slight panic kick in upon realizing that he had lost his money, and he and his friends were pondering what to do. The next person in line was a dad with an adorable little girl in accompaniment, and he asked for tickets for she and him, and pointed at the boy who lost his cash and said that he'd buy his admission for him too. The little kid's mind was blown at the good deed, we have further proof that Mayfair patrons are awesome, and are reminded that Muppets clearly bring out the best in all of us.
Posted by batturtle at 11:39 PM