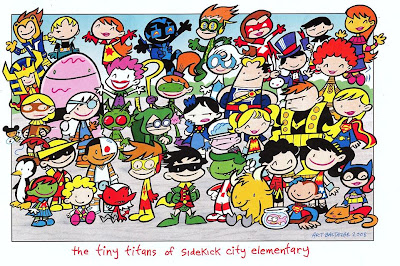 Back in the 80's, DC Comics put out an ad campaign proclaiming that DC Comics Aren't Just For Kids. I guess it made sense at the time, as the comic book industry was trying to point out that comic books are just like novels or movies or tv shows or any form of entertainment. There's some stuff that's kid friendly, and some stuff that is not. Comics have always been hindered, even to this day, by the thought that it's all stories about guys in capes punching mad scientists in order to save the world. Not that there's anything wrong with those stories...I like reading super-hero stuff.

In the 80's comics were in the midst of quite a transformation, with a landslide of diversity and quality in their storytelling. Books like Watchmen, Dark Knight Returns, V for Vendetta, Vigilante, Usagi Yojimbo, Love & Rockets, Cerebus and many more were gaining heavy media attention and selling many a book to an increasing fan-base.

The backfire was that it seems like the thought of making comic books for kids seemed to be left behind. And a generation of kids grew up with books aimed at geeks in in their 20's, got bored, and a whole bunch of 'em decided to go spend all their money on video games instead of comic books.

Being a comic book reading lifer, whenever I am reading a really great kids friendly comic book I try to spread the word about it (considering that almost all the DC super-hero books are rated for Teens +, they are alas few and far in-between). Often the highlight of my comic book reading month is a super-hero comedic unexpected phenomenon that is Tiny Titans.

Every issue of the Eisner Award winning series has been produced by the team of Art Baltazar & Franco Aureliani. The plot focuses on elementary school versions of may popular well-known DC characters like Robin, Kid Flash & Aqualad...and the not quite so well known like Miss Martian, Blue Devil and Offspring. The biggest complaint and fear that non-comic readers have it seems is that they don't know where to jump into a storyline. The best part of Tiny Titans is that all the issues are self-contained. You can pick up issue one, one of the collected editions, or the recently published issue #49 and be just fine. Much like animated series the likes of Spongebob Squarepants, it's completely kid friendly, but chock full of stuff that will go over kids heads and keep parents entertained.

So, if you have a little one and would like to introduce them to the awesome world of comic books, might I suggest Tiny Titans? They'll be highly entertained, and you can read 'em too. In fact, much like when my mum bought me stuff like Captain Carrot & His Amazing Zoo Crew when I was a kid, you may find yourself pretending to buy it for a kid but really buying it for yourself to read. As long as you share, they will understand.