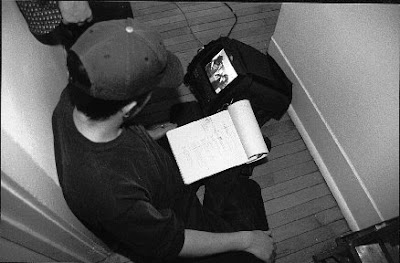 I guess this image could count as Blast From the Past #3 (I don't have drawers full of cool sketches like the TMNT blog has at it's disposal). That's me with a clipboard holding the lined shooting script, looking at a video assist monitor. This was taken during the shooting of one of the Villains shorts, which if I remember correctly was somewhere around 1950. Seems that long ago anyhow.

In more current news, am busy trying to get a few projects going:
I just wrote an 8 page back-up story for a friends comic book mini-series. The series that I co-wrote with Howard Wong is in the limbo of being shopped out to publisher's. In other writing related news, trying to figure out what to do with a trio of finished feature length scripts I have. Using them to sell out in some way would be just grand.

Also possibly re-tooling the ole' Comic Book Connection idea after having been inspired by a couple feature length doc's. Might be easier (well...easier is probably the wrong word) to focus the idea into a documentary with a beginning, middle, and end instead of a series straight away.

Basically, in 2009 I hope to do a longer project in some form. Fiction or doc... maybe both. If I can fit ambition and productivity in-between time spent at the Mayfair watching movies that is.
Posted by batturtle at 6:01 PM No comments: