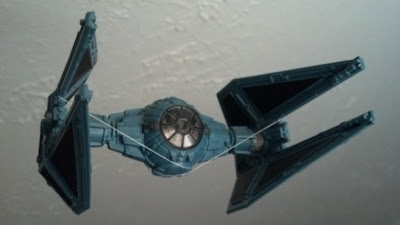 Yesterday we hung Star Wars ships from pre-existing ceiling hooks in the apartment, that I would guess the former tenants used to hang plants or something slightly less geek tinged from. There were five hooks and I had five vehicles, the fates decreed that this had to be. And by we hung what I mean is that my girlfriend had the skills and knowledge in which to hang the toys from wire from the ceiling, and I supplied said toys and had the idea to ask "Can we hang some Star Wars ships from those things?". Besides for the ability to get her into see free movies and a giant library of comic books for her to read, I don't really bring that much of value into the relationship.

I think this puts me one step closer to living in a full-blown Pee Wee caliber of a Playhouse, just need a fire-fighter's pole and a Rube Goldberg machine and we're all set.
Posted by batturtle at 2:12 PM