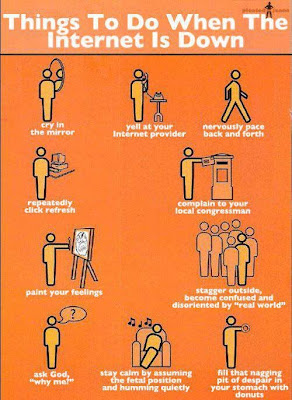 It was my own fault due to the hectic nature of getting ready to move mixed with my often procrastination when it comes to doing boring grown-up chores, but I was without the internet for a whole week. Well that's not entirely true, thanks to the fact that we live in a Jetsons like future society, I at least had my Star Trek caliber smart-phone.

It is amazing how one can completely crumble and lose all track and knowledge of the outside world and current events when the internet leaves your life for one short week. Without the aforementioned smart-phone I would have been really lost. At least with that gadget I could get my e-mails, check the comic book geek news, write some Mayfair tweets and know how cold it was outside. Now I just have a truck-load worth of late-night talk-shows to catch up on. Soon I will have watched a bunch of Daily Show's and Colbert Report's and again be all caught up and informed on important world events again.

What are we expected to do in a world without the internet? Go out and buy a newspaper? Listen to the radio? Talk to other people and socialize? If we revert to that kind of behavior the terrorists have truly won.
Posted by batturtle at 11:54 PM