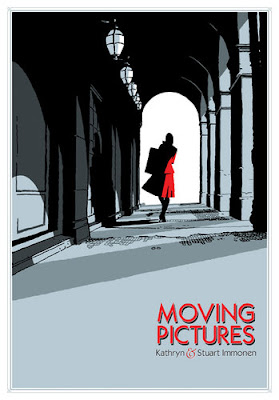 Even to this day there is a misconception from many that comic books are are super-heroes and Adam West Batman era sound effects or sub-par re-hashed endlessly ancient comic strip characters. There are a lot of those things in the medium for sure, but thinking that comics are all that is like thinking that movies are all, uhm...super-heroes and loud sound effects or sub-par re-hashed endlessly remakes, reboots and sequels.

One of my best friends is a big-time comic book reader, yet can't stand super-heroes. Evidence that you can be a comic geek without reading stories about brightly spandex attired madmen punching it out, tossing cars at each other and toppling buildings onto unsuspecting regular humans.

One such comic that I just read was Moving Pictures by Kathryn and Stuart Immonen from Top Shelf Productions. I've been a big fan of Stuart Immonen's art for years on various big-shot DC and Marvel Comics the likes of Superman, Avengers and Spider-man. Kathryn Immonen wrote a brief but impressive run on my favorite (and much missed) Marvel kids team book, The Runaways.

This book couldn't be more different than their previous super-heroic writing & artistic efforts. The characters are on opposite points of view in saving great pieces of art during World War II Nazi-occupied Paris. One is a female Canadian curator trying to save said great works from the Nazis, the other a Nazi officer trying to attain and catalog the works for the German empire. And if that situation isn't complicated enough for her & him, then an unexpected and somewhat inappropriate for both sides romance happens.

The artwork is black and white, simple and pretty spot-on for it's story. If you or someone you know are intrigued by the comic book medium but are intimidated by the endless catalog of reading possibilities, something like this is a great jumping in point to the comic book medium. Moving Pictures is a great quick 144 page read, and perfect if you or someone you know want to try out reading a comic, but undead demonic vigilantes with flaming skulls on motor bikes isn't quite your cup of tea.