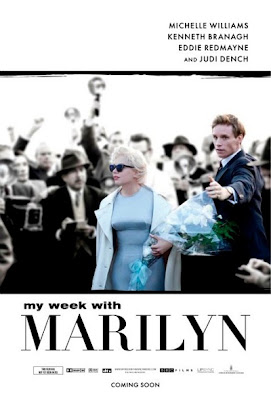 After an afternoon of working at the Mayfair, stuck around to watch My Week With Marilyn. Enjoyed the film greatly, possibly even more so than all the other Oscar type movies from this season. It made me really want to watch the actual film that the movie was a behind-the-scenes tale about, and see some Marilyn films in general. Her body of work is a hole in my cinematic viewing history, pretty sure the only one that I've seen is Some Like It Hot.

Michelle Williams did an incredible job in her portrayal of one of the most famous women who has ever graced planet earth. She did just as an impressive job as she did in Brokeback Mountain, Blue Valentine or Shutter Island. Considering where her talents have justifiably taken her, it's a little staggering to remember that a decade or so ago she was the fourth tier character on a teen soap opera.

You've got two more chances to check out My Week With Marilyn at the Mayfair, 7pm on Monday March 19th and Tuesday the 21st. I know that it's really nice outside all of a sudden, but sitting in the dark watching a great movie is way better than enjoying the outside comfort of a beautiful post-winter day.
Posted by batturtle at 11:07 PM