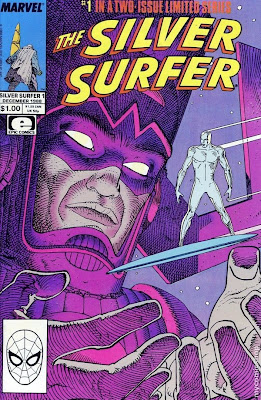 It seems that not a week goes by without another of the greats passing away. Today when taking a quick browse through the geek news online, was hit with the information that Moebius had died.

I do believe that my introduction to the incredible comic book artistry that was Moebius, was the Stan Lee written two-issue Silver Surfer mini-series that was published in December 1988 / January 1989. I distinctly remember thinking that this was not the average Marvel Comics super-hero book that I had before me. Others will pontificate in much greater detail about the man's amazing talents, but at twelve years old I knew that I had just been introduced to a whole new level of comic book artistry.

I can't remember exactly, but I may have seen the heavily Canadian talent content filled animated feature Heavy Metal before reading his Silver Surfer work. I watched a lot of movies that I was way to young to see, luckily I ended up not scarred for life, though I did sink a whole lot of money into co-ownership of a movie theatre. Although uncredited, Moebius' Arzach comics were the inspiration for the Taarna segment of the anthology. He also worked on films the like of Alien, Tron, Willow, and The Fifth Element. Evidently, I just learned this bit of geek trivia moments ago, he also designed the Probe Droid for The Empire Strikes Back. If the man's accomplishment's weren't enough, now I find out that he only designed the coolest robot from the best Star Wars movie ever.

Another sad day for geekdom. Go read a Moebius book. I promise that they're greta.