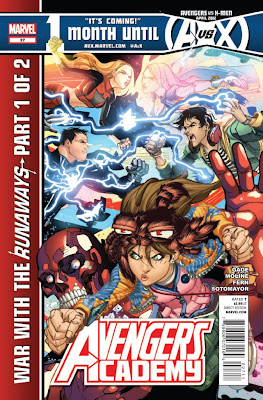 On the heels of Brian K Vaughan returning to comic books with Saga, some of his greatest characters have resurfaced in Marvel Comics. In a comics world that much like film and tv is filled with a lot of reboots, re-imaginings, sequels and spin-offs, Brian K Vaughan and Adrian Alphona gave us the Runaways. Too often in comics, new characters are just other versions of the established star. They are a irl or a boy or a woman or a kid, but still have Super or Bat or Flash in their name. Here we had something that was a welcome difference.

A group of original characters in an original plot-line set within the established Marvel universe. They were a bunch of kids on the run, sons and daughters of super-villains, band together into a family of friends and not a spandex costume amongst them. I loved Runaways like no other Marvel comic maybe ever, and when the creators left the series I was sad. But, when they left the writer stated that he hoped the characters would continue along in the universe under the creative talents of other writers and artists. And the wish came true when the series was taken over by the likes of acclaimed comic writers Joss Whedon, then Terry Moore, and finally an impressive if too short of a run from Kathryn Immonen. The last issue was released in 2009 before being cancelled mid-story-arc, and despite talk of a Runaways movie with a script from Vaughan, I was afraid that my favorite Marvel characters may become lost to once popular and now cult status obscurity.

It's hard to keep good characters down though, especially in comic books where writers love writing about their favorite characters. Look at any super hero team, and if there's a character or two on it who aren't quite the cultural icon of a Batman or a Wonder Woman, they are there because the writer or artist loved that character when they were a kid. If Joss Whedon does a stint on X-Men, or Patton Oswalt writes a JLA book or Kevin Smith writes some Daredevil, I bet that it's because these were their favorite comics to read when they were geeky little junior high comic book nerds.

Hence, I have a feeling that Christos Gage, the writer of Marvel's current teen super-hero book Avengers Academy, is a fan of the Runaways. And as soon as he was able to and got the thumbs up to do so from his editors, he wanted the Runaways to guest-star in his comic. I am not the biggest of Marvel Comics reader currently, and had never read or even known all that much about Avengers Academy. I could assume and piece together that it's a slight rip-off of the X-Men model of a school for super-powered teens, learning to make the best use of their powers with eventual plans to have them be actual Avengers. It's also an excuse for Marvel to have yet another comic with Avengers in it's title (Avengers, New Avengers, Secret Avengers, Avengers 1959, etc...) to catch the eye of movie-goers who are making huge success of Avengers films like Thor and Iron Man.

This comic would provide the much needed inspiration for those who wish to don superhero costumes for this upcoming Halloween season.