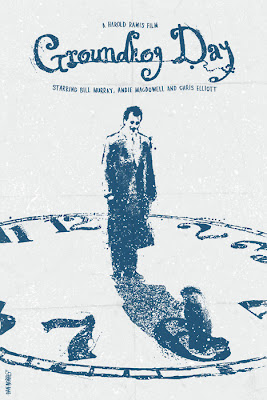 In 1993, Ghostbusters alum Bill Murray and Harold Ramis reunited for this bizarre time-bending comedy, and not so surprisingly the results were great. I'm pretty much a fan of Bill Murray at all times (except for maybe in Garfield movies), and Harold Ramis had proved repeatedly that he could write for Bill Murray with films like Meatballs, Caddyshack and Stripes on his resume. What I like about Groundhog Day, is that it's just a few steps off from being a weird David Lynch movie or horrifying Twilight Zone episode. Murray and Ramis and company pull off a comedic 'It's a Wonderful Life'-esque tale of repeating the same day over and over, that deserves repeat viewings.

On February 1st and 2nd at 9pm at the Mayfair, celebrate the weirdest holiday to be listed on your calendar, and enjoy multiple viewings of this modern comedy classic at the Mayfair. If the theatre sees it's shadow, winter is over! Or wait, is it the other way around?
Posted by batturtle at 11:59 PM