Everything that I need 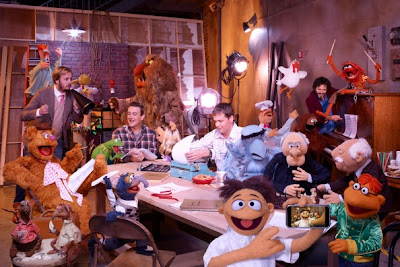 My earliest memory (I'm pretty sure) is watching the opening credits of The Muppet Show on a lil' black & white TV. My favorite song ever written for a movie is probably Rainbow Connection from the original Muppet movie. I love Sesame Street, Fraggle Rock, and Muppets Tonight and every time I see a picture or interview or behind the scenes footage of Jim Henson I get a bit choked up and sad that his life and career was cut so short.

Today I finally got around to seeing the new Disney produced Muppets come-back film simply titled 'The Muppets'. Ventured out to the wilds of Orleans to visit the Mayfair's sister theatre, since there's a chance that Disney won't let us play the movie at Mayfair Prime. I was pretty sure that I was going to love it, and it was not so surprising that I spent the whole damn movie on the verge of over-the-top weepy sentimental emotional wreck tears. I saw Jason Segal on Craig Ferguson's Late Late Show discussing that he did a bunch of interviews for the film along-side none other than Kermit himself. And that one interviewer had a joyful overwhelming tearful break-down upon meeting Kermit and that they all hugged and cried due to the power of the Muppets. That woulda' been me too if I had been there. Crying and hugging Jason Segal, a journalist and Kermit.

If there is any sense of judging true talent and greatness from those folks who run the Oscars, The Muppets should get at least three nominations for best song. I can't stop humming the title-track, and I do not mind. I want to see The Muppets and some of their human friends performing live at the Academy Awards ceremony.

The plot of the movie, which is not the biggest of a stretch for a movie involving Muppets, is that they have to put on a show to try and raise money to save their theatre. My dream is that the success of the movie instigates the actual Muppet Show's return to television. Then I can sit in the comfort of my own home singing along with my favorite felt characters and crying joyfully.