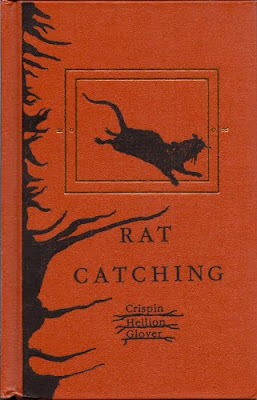 I didn't know what to expect from our first night of hosting Crispin Hellion lover at the Mayfair. I knew there would be something classified as a slide-show with live performance accompaniment, a film, and a Q & A. I knew the film would be bizarre at a level that might make a David Lynch movie look like something Chris Columbus directed. I also had a horrible feeling that the event might be a diva laden train-wreck of an evening.

Instead, I was surprised and stood corrected on all fronts. When I met Crispin he was friendly, polite and had a genuine appreciation at being able to perform and screen his work at our theatre. The live performance slide-show mash up was rather enthralling and definitely kept one's attention. And, thanks to Mister Glover, I have a new favorite thing to randomly and inexplicably yell, "Egg Farm!". The movie, although looking like a student film at times, and filled with maybe not the most top-notch of performances, was actually good. That might not sound like the most glowing of endorsement for his work, but I was expecting something pretentious and / or unwatchable. I found it neither.

Only pet peeve of the night, and a long running pet peeve of mine that I've run into every damn time I've attended a comic con or film screening related Q & A, is the person asking the rambling self-aggrandizing comment of a question that no-one understands and the guest has a difficult time answering. You sit there and feel the whole audience turning on the person as you try to contain your hatred for the pompous hipster types. For a very brief millisecond, I actually thought that the rest of the audience might turn on the person while they droned on for what seemed like a thirty minute long unending nonsense of a big brained query. Other than that though, everything was fine, and I look forward to Crispin's return to the Mayfair on Saturday night.
Posted by batturtle at 11:59 PM