I know you are but what am I? 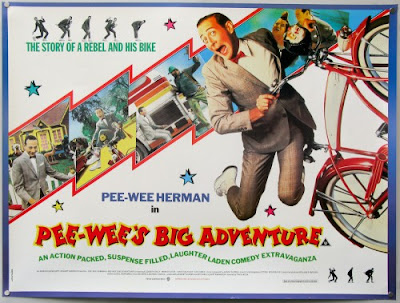 Tonight at 7pm Lost Marbles presents maybe the most requested movie in modern Mayfair times. Pee Wee undertakes his grand quest in hopes of getting back his precious bike in his self titled Big Adventure. If you can't make it tonight, you have a second chance Saturday afternoon (and if you like Pee Wee, very likely you'll want to stick around and watch Beetlejuice too).

I got the Blu-Ray of The Pee Wee Herman Show on Broadway for Christmas, and upon watching and greatly enjoying that, I'm even more enthused about tonight's screening of this 80's masterpiece. If you are not interested in seeing Pee Wee Herman, you may have to revoke your Mayfair membership card and go to the multiplex and watch something more to your taste like Transformers 3.
Posted by batturtle at 2:13 PM