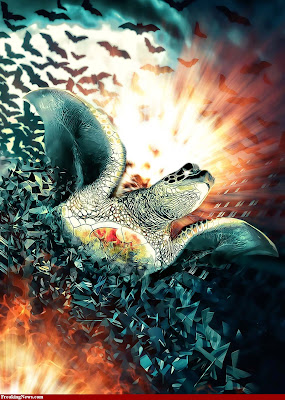 I find it very peculiar and interesting that the word Batturtle might have similar importance and meaning to other people out there around the planet for different reasons. Thanks to the internet every once and a while I stumble onto an alternate universe Batturtle from my logo, like the one pictured above. No idea what it is, no idea who did it, but it too is called Batturtle. I guess it's the same feeling vice-versa for whoever did this picture of a Bat emblem stamped turtle flying out of the sunrise, surrounded by bats and some other stuff. He or she probably stumbles on my cartoony little Batturtle animation and also thinks "What the hell? Someone else out there uses the word Batturtle too?!"

I came to the realization that the word Batturtle has now been a part of my vernacular for 20 years. It's strange how a Teenage Mutant Ninja Turtles story (featuring one of the guys in a Batman costume for Halloween) followed by a random off the cuff sketch 'portrait' that a friend did (of a Ninja Turtle in a Batman shirt as me) has caused the word Batturtle to stick around in my life for two decades. I guess it's just as random of any other at the time seemingly nonsensical or unimportant in the grand scheme of things event that ends up sticking with you for life.
Posted by batturtle at 11:25 PM