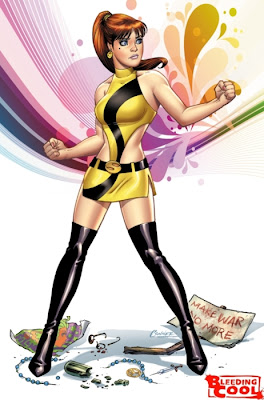 On the heels of DC Comics rebooting their whole universe in 2011, it was hard to imagine that they could possibly top that in any way possible in 2012. Then, early this-morning news came over the geek-er-web that knocked comic nerds on their ears. After much speculation, rumors and hints that this unbelievable event could ever happen, DC announced that they would publish a number of new comic mini-series set within the Watchmen universe. This summer they'll release a number of prequel tales, all without participation or approval of Watchmen writer and co-creator Alan Moore. Alan Moore has already in recent years been pissed off by unwanted adaptations of his work put into motion picture form. His name was noticeably absent from the film version of Watchmen. Dave Gibbons, the brilliant illustrator of the book, didn't have the same reaction, his name was on the film, and he helped out on some of the designs.

The first thing that I thought when I read the news this-morning was that the editors at DC better watch out, since I'm pretty sure that Alan Moore is a warlock with magic powers. The second slightly more serious thought was that I hate it when publishers do things like this, against the express objection of creators. Imagine if Calvin & Hobbes was coming back without Bill Watterson or someone other than JK Rowling was being allowed to write Harry Potter stories, and the creators were furious but couldn't do anything about it.

The third thing I thought was "Holy Hell, look at the writers and artists on these damn things!". Every single mini-series is being done by top notch creators. Not just A+ talent, but as a bonus, some artists who are incredible and don't even draw comics that month. Amanda Conner, my favorite artist, is on a book. Adam Hughes is drawing one, and I actually can't remember that last time he's drawn sequential art it's been so long. Andy Kubert is popular enough in his own right, add the fact that his legendary father Joe Kubert is along for the ride as well, and that's another must read comic. There are seven mini-series and I want to read every single one of them despite my objections.

I can see both sides of the problematic argument here. DC Comics owns these characters, they are a business, they will make money off of this decision. And, they will be giving money from the likely success of these new comics to original creators Alan Moore and Dave Gibbons. Plus, they clearly care about making the books the best quality that they possibly can by hiring this stellar group of comic book writers and artists.

I can't help but feel that DC is falling to reed and ease over true possibility of profitable creativity though. Instead of prequelizing arguably the best super hero comic ever made, why not tell new stories. Instead of a press release about Watchmen prequels, what if instead the press release was to announce all of these creators making brand new characters for the publisher. Not Superboy's, Batirl's or Kid Flash's...but actual brand new characters. I know that I for one as a comic book reader would have been just as interested in an announcement as such.

Like a Star Wars nerd complaining endlessly about Geore Lucas and Star Wars and then buying the Blu Rays anyhow, despite any hesitation I might have over fat cats disrespecting artists, I will read the hell out of all of these upcoming comics. Even though I'm afraid that Alan Moore might curse me and turn me into a frog.