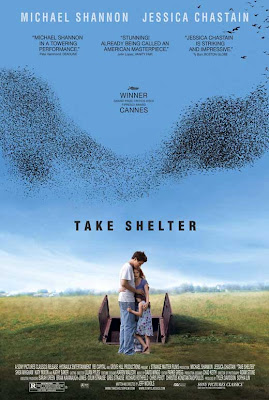 Tonight and tomorrow at 9pm at the Mayfair (Wednesday January 4th & Thursday the 5th) are your last couple of chances to catch one of the best films of 2011 (maybe the best film?). Take Shelter tells the tale of a simple man with a happy if not stress filled family life (long hours at work, bills to pay, and an adorable little daughter with hearing problems who they hope to get an operation for). Our hero begins having frightening visions of an oncoming apocalyptic storm that leads to even more horrifying events than the average destructive tornado filled thunderstorm does. That mixed with his obsession of building a backyard bomb-shelter in light of the oncoming storm which he believes to be on the horizon throws his life into turmoil. The film reminded me of a great Richard Matheson story. It was horror film from a certain point-of-view, not a Friday the 13th or Saw movie style of horror, but horrific in a fascinating way none-the-less.

That's about all that I want to say about the film. I'm always hesitant to play spoiler, I don't like reading reviews a lot of the time just for that very reason. I avoid trailers half the time just in case they're one of those horrible ones that give away the whole damn movie in a three minute time-frame (I think Ides of March was guilty of that).

Having said that, I did love this movie and do want to spread the word about it's existence in any little means that I can. Especially to let Ottawa folks know that they can catch it for the next couple of days in all of its big screen glory.

I haven't had a spare moment to figure out my favorite movies of 2011 list, but the more that I think about it the more I think that this one might be at the top (though I haven't seen The Muppets yet, and I do love those Muppets).
Posted by batturtle at 3:28 PM