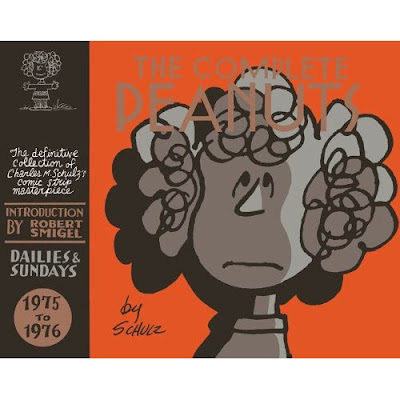 The second book that I've finished reading in 2012 is another volume of The Complete Peanuts, this one from the years 1975 - 1976. It's still a book with pictures of course, as are most books I read, but this is at least a big fat hard-cover comic book. This is the 11th book I've read in the series, and I'm continually amazed at the quality. Most other comic newspaper comic-strips had their day in the sun and then become boring and repetitious. When was the last time Blondie or Haggar the Horrible or Family Circus was actually funny or had something interesting to say?

I saw an interview with Garfield creator Jim David back when the first Garfield live-action / CG animated film came. Somehow within this interview he managed to pretty much unabashedly admit that he didn't care about Garfield anymore. He spoke of how the the strip was farmed out to ghost writers and artists (they even showed footage of them), and that they put as little effort as possible into the thing yet kept making millions off of it. Now that's a ringing endorsement to go and pick up a Garfield book if I've ever heard one. Oppositely, Charles Schulz did everything on Peanuts for about half a century and never stopped caring and never stopped producing great timeless comics that puts pretty much everything out there currently in newspapers to shame. Pick up any of these volumes, you will be impressed. If you are not, maybe a gag about a cat in a bad mood who hates Monday's and loves lasagna would be more to your mindset and liking.
Posted by batturtle at 11:54 PM