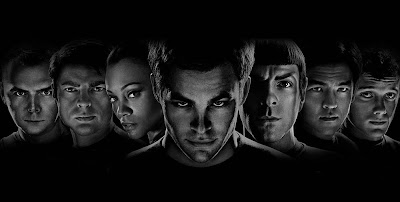 I was going to excitedly write about how the new Star Trek movie started principal photography today. I was mistaken though, they didn't start shooting today, they started on Saturday! That means that J.J. has been directing cast and crew to do awesome things for three whole days!

A couple years ago I was fairly disinterested in what at the time was being portrayed as a Star Trek reboot. It was dark Star Trek times for me. I was pretty much a life-time fan of the franchise, and was coming off of hating the last two feature films and the last two tv series. I usually have no problem with remakes or reboots. I think that the more recent Ocean's 11 and True Grit are much better than their cinematic predecessors. And, John Carpenter's version of The Thing (also not an original) is one of my favorite movies of all time. The thought of someone other that William Shatner, Leonard Nimoy and DeForest Kelley playing Kirk, Spock and Bones was quite unappealing to me. I found it disappointing that J.J. Abrams had to remake instead of just tell some new tales from the Star Trek universe.

When making a new movie featuring classic characters, I don't think an actor change is distracting if the character existed before the actor. Batman isn't Christian Bale. Dracula isn't Gary Oldman. Zorro isn't Antonio Banderas. James Bond isn't Daniel Craig. William Shatner on the other hand is Captain Kirk. Leonard Nimoy is Spock, DeForest Kelley is Bones. Seeing a bunch of young punks re-telling their adventures seemed boring to me. The first turning away from hate came with the news that Simon Peg was cast as Scotty. Turning away from hate part 2 came with announcement that Leonard Nimoy was going to make an appearance.

Then, having read a bit about the film and knowing that J.J. and company love a good alternate universe story (they even ended the teen soap opera Felicity with an alternate universe story arc!), I had a feeling that something better than a remake might be happening. And something better happened indeed. They decided to instead tell the earlier stories of the beloved sci-fi characters thanks to an alternate universe twist to the tale. Genius! Now they could do whatever they want to the characters and the universe without being stuck within the confines of a prequel. While at the same time not destroying the old universe and hence not pissing off fans of the classic series and films.

I went to see the movie, and was shockingly sufficiently impressed and blown away before the opening title even showed up on the screen. The prologue alone ended up being so impressive to me that I thought it might be hard for the rest of the movie to live up to the first handful of minutes. J.J.'s Trek effort ended up being one of my favorite movies of the year.

When J.J. goes and does other movies that I think are pretty great like Super 8 or Mission Impossible: Ghost Protocol, I now get a little sad that he doesn't just devote all of his time and effort to Trekkyness. So I just sit by and cross my fingers and hope that he puts a Gorn or some Tribbles in the new movie and count down the days to May 2013.