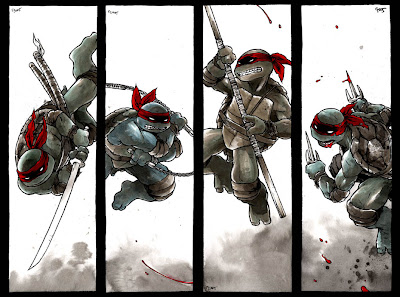 A couple years back co-creator & copyright holder Peter Laird decided that he was done with the Teenage Mutant Ninja Turtles. He sold them off to Nickelodeon, and put an end to Mirage Comics publishing. Having been reading every single issue of the black & white / all red head-bands original incarnation of the characters, this of course made me sad.

I figured the next re-booting of the characters would be more stuff along the lines of the rainbow coloured headbands Archie Comics / Saturday morning cartoon kind of stuff. Hence, when IDW announced that they would be starting up their own re-imagining of the series and the pictures released featured red head-bands all the way around, I was excited. The fact that IDW had co-creator Kevin Eastman was returning to the world of TMNT had me even more intrigued. I thought it was a great tip of the hat to the legacy of these characters that they were being portrayed in their original style. I never liked the rainbow coloured versions of my beloved characters. Mainly due to the fact that I know the colour change didn't happen for any kind of thematic reasoning. It happened because the toy company was worried about kids telling the characters apart, and they wanted to be sure that they could sell four action figures to kids (they eventually had such classy figures as TMNT in clown outfits). I was always able to tell the characters apart, even in a world where most the stories I read with them in it were published in black and white. I really liked the first live action movie, but I always thought if I were rich and mad with power that I'd take that film and frame-by-frame re-colour it to an all red head-band cinematic offering.

It just wasn't meant to be though. I saw an add for an upcoming issue in which Turtles with rainbow coloured were featured. Then, as I flipped the page of issue #5 of the current incarnation, my heart sank as Splinter handed out new more colourful head-bands to his sons. I can't stand reading stories in which my beloved Turtles aren't all wearing red head-bands. Just makes me think of selling out and betrayal of story in favour of profit. So I cancelled my subscription. A sad geeky state to be in indeed. Well, it means that my comic book purchasing budget remains even though, with Brian K Vaughn's new comic Saga on the horizon.

When I eventually get my TMNT tattoo at least I'll be able to always look at my arm and think of happier geeky TMNT times.
Posted by batturtle at 3:19 PM