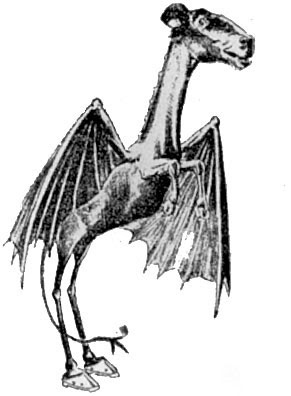 Went to a big family hockey game outing last night. A post Christmas gathering, something that I got to attend on the free, and even though I admittedly care very little about the ins and outs of the sport of hockey anymore, a very fun event none-the-less. The team came back from a 2 - 0 deficit, and the captain scored in over-time to secure the win (on a night in which he was praised for recently scoring his 400th career goal).

The Senators were playing the Devils of New Jersey. Every time that team crosses my thoughts, all that I can think of is how awful their logo is. It would be so much cooler if they had a logo to match the monster that haunts the Pine Barrens of the teams State in which they are named after. Instead of a fairly basic NJ with horns, a ferocious horse bat amalgam would make a much more appropriate design for their uniforms. Or so thinks a fan of cryptozoology with a penchant for believing in monsters whose mind wanders whilst watching Canada's favorite sport.
Posted by batturtle at 10:39 PM