The ghost with the most 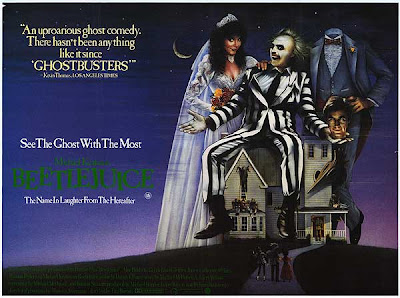 I love Beetlejuice, Tim Burton, Michael Keaton and Batman. So I don't mean this in a negative way to towards their talent or those two films. But every time I see or discuss Tim Burton's classic film featuring a virtuoso performance from Michael Keaton in the titular role, I can't help but ponder in wonder at how Warner Bros looked at these two guys and thought; "Yes. We need a director and star for Batman. Our giant budgeted epic summer blockbuster potential of a movie is perfect for these two guys." I am happy they got the gig, and I guess it's no weirder than the guy who did Evil Dead II getting to direct Spider-man, yet it still astounds me a lil'.
Posted by batturtle at 11:45 PM