I'm a Muppet of a man 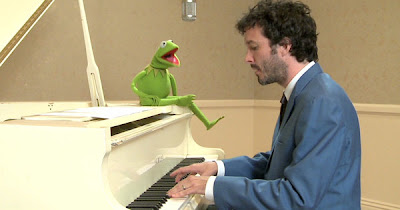 I always complain about the Academy Awards and other movie trophies, due to my belief that movies are subjective and you can't in your right mind put the title 'Best' on something within a calendar year. Me and Harry Knowles thought that 'Scott Pilgrim vs the World' was the best movie of 2010, the Academy decreed to award it zero nominations, and I don't think it even made a ton of top 10 lists from various sources. Look at the history of cinema and there's an astounding number of films that are considered classics that never got a shiny trophy (for example: Do the Right Thing, Fight Club, Citizen Kane, Army of Darkness).

My anger towards the nonsensical and unimportant awarding of an art-form aside, I today am hypocritically ecstatic and proud that Bret McKenzie got a song nomination for 'The Muppets'. I was coincidentally listening to the soundtrack on my walk to work this-morning, I believe right around the time that they would've been announcing the contenders. I'm very happy for The Muppet crew, as the more I think about it, the more I think it may be my favorite movie of the year.

Plus it means that when I'm at The Mayfair watching the Oscars on the big screen on the 26th (being a hypocrite again, I know...I know...) that I'll get to see Jason Segal and Bret and Walter the Muppet sing the song live. Luckily 'Life's a Happy Song' didn't get a deserved nomination too...means I'll likely avoid crying. Maybe.
Posted by batturtle at 11:57 AM