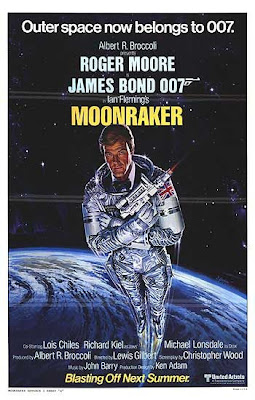 No James Bond! Even you need a helmet to survive the rigors of solo non-spaceship style outer space travel! I think this is my new favorite bad movie poster. The strange logic of the character not wearing a helmet in space 'cause they want to show off the characters face reminds me of the stupidity of those running the Hollywood machine. Reminds me of how today you can't do a super-hero movie like Spider-man or Iron Man without showing the masked characters non-masked face all the time 'cause of Hollywood wanting that stars face on screen for as long as possible for your entertainment dollar.

Speaking of entertainment dollar, Tuesday January 17th at 7pm you can catch the third of four 007 double bills screening this month at the Mayfair. This one is a six degrees of Star Wars special, extra exciting for all the movie geeks. First, The Man with the Golden Gun features Sith Lord Christopher Lee out to thwart Bond's world saving plans. Then, Moonraker follows at 9:20pm. It was made specifically due to Hollywood scrambling to make more space movies after the unexpected universe shaking success of a lil' sci-fi film that came out of nowhere, which was of course Star Wars. Bond vs Darth Sidious AND Bond in outer space! What more could you possibly want in an evening at the cinema?
Posted by batturtle at 11:54 AM