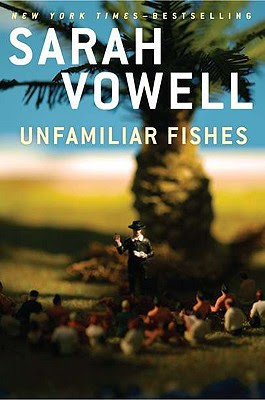 In one of the openings to a Stephen King book, where he always addresses his 'constant readers', the topic of the day was the audio book. Authors seem to have embraced the audio book as a legit means to reach their current fans and new sets of eyes, or in this case ears. Authors are not only participating in the production of these adaptations, they are performing the readings, or if not themselves they get A list talent to help out.

On the walk home from a bit of work at the Mayfair tonight I finished listening to Unfamiliar Fishes by Sarah Vowell. I'm a big fan of Ms. Vowell's work, whether it be books like Assassination Vacation, or acting in The Incredibles. Her latest work is about Hawaii, and the tumultuous and rather horrible time that they had in becoming a member of the United States. Books like this one translate extra well into audio form thanks to being treated like an old timey radio play. For example, Unfamiliar Fishes features music from Michael Giacchino (he did the scores for Lost & Star Trek & Super 8!), and has an impressive ensemble cast that would make any filmmaker jealous. Where else could you possibly enjoy the acting talents of Paul Rudd, Keanu Reeves, Catherine Keener, and Bill Hader all in one place? And it doesn't stop there, you also get to listen to John Hodgman as Teddy Roosevelt and Edward Norton as Grover Cleveland!

As Stephen King said, we all love the Beatles, but sometimes you even might get tired of listening to Sgt Pepper one more time. So instead, why not try multitasking that road trip, bus to work or walk to the store by checking out an audio book? I also recommend the ones by comedians (Steve Martin, Lewis Black, Tina Fey), or Star Wars ones (they have litsabre and R2D2 sound fx in 'em).
Posted by batturtle at 11:47 PM