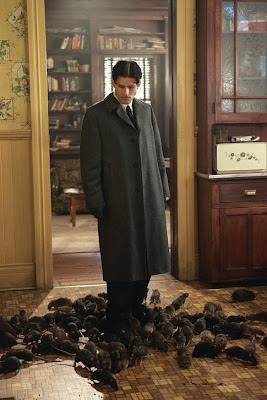 Things with Crispin Glover were slightly less chaotic last night, mainly since he was already in town. He was in town and not having to be rushed to the theatre via being picked up in Syracuse thanks to the weather cancelling flights to Ottawa. Got to actually chat with him a bit before the show, and rather boringly to report, is just a lovely guy. After the live show and presentation of his first directorial effort, What Is It?, I wanted to get a couple of things signed. So I used what little power I have in this life to hop to the front of the line, and get an autograph before our loyal patrons then. I thought I would do so quickly, but then Crispin just wouldn't stop talking to me. Not sure how long I stood there with him, but it seemed like about 15 minutes. But I got a book signed for a friend, one for me, and my Willard DVD autographed with a nice personal message that he tagged on. And, since I was technically Crispin's employer this weekend, I think that puts me akin to the likes of Steven Spielberg, Tim Burton and Robert Zemeckis right?
Posted by batturtle at 11:59 PM