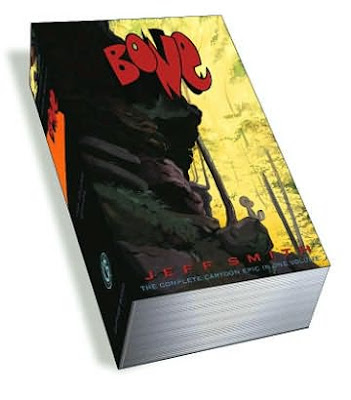 Word came down through the interwebs that Jeff Smith's masterpiece comic book Bone had been assigned a writer and director. Usually I'm pretty excited to hear about the latest comic book to bi screen adaptation. Bone, I am more than a lil' bit hesitant about though. Writer Alan Moore believes that his comic book stories are just that...comic book stories. His stories were created for that specific wonderful medium of paper, ink, colour and word balloons, and not meant to be seen at 24 frames per second with actors giving life to the dialog and cameras and fx houses turning drawings into reality.

It is extremely hard for me to pick out my favorite comic of all time, but with a gun to my head or if stuck on a desert island with only one book to read, it might just be Bone. I don't mind stuff like The Avengers, since it's not based on one particular tale. The filmmakers are drawing from a bi complex history and picking and choosing stuff that fits best into a couple of hours. With stuff like Bone though, picking and choosing is a bit more difficult. Bone has a beginning middle and an end. There are 1342 pages in the complete Bone story, and I'd be hard pressed in recommending what stuff can hit the floor without detracting from the over-all story.

I'm also not too excited about these characters having a voice. I always respected the hell out of Bill Watterson for never selling out and making Calvin & Hobbes cartoons or licensing out Calvin & Hobbes for merchandising. Having said that, my apartment is filled with various forms of comic book merchandising, and I think that some of the Peanuts cartoons are brilliant. Though sometimes I think that Harry Potter might hold a more romantic place in readers hearts if when they read the books over again they could do so without hearing Daniel Radcliffe's voice in the role of their favorite young wizard.

Though I must play devils advocate with myself and remind me that Scott Pilrim vs The World was my favorite film of 2010. And that that was a comic that I thought impossible to whittle down to a two hour movie effectively and still be respectful to the source material. Maybe I should just sit back, not fret, and realize that even though there are only about 3% original stories coming out of Hollywood, it doesn't mean that only 3% of the movies are good. I would be happy if Bone were left alone, but mayhaps it is possible that I will be happy with the movie too.
Posted by batturtle at 11:58 PM