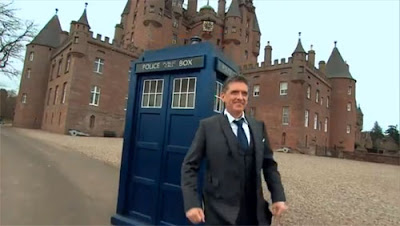 Craig Ferguson has been the best thing to happen to late night TV since his boss David Letterman took over the post Johnny Carson spot on NBC some thirty plus years ago. His avoidance of pre-interviews and cue-cards make for truly original and intelligent interviews and television. Plus he has a gay skeleton sidekick robot.

Craig brings his Late Late show stylings to his home-land of Scotland all this week. Well, he's not actually doing a full blown talk-show there, as I don't think that that is in the shows finances. As Craig is fond of pointing out, his show films in a basement, has no lighting or band...and genuinely does have very little in the way of budget. What he will be doing is visiting Scottish landmarks, pubs and locations from his youth with some of his talk-show friends like Michael Clarke Duncan and Mila Kunis, and there's a cool new cover of his theme song from The Imagineers. Plus, the TARDIS is involved somehow, and how could that possibly not be awesome? Just so I can be extra disappointed when this doesn't come to be, I'm going to leap to the conclusion that he has a cameo in an upcoming Doctor Who episode.

Posted by batturtle at 3:51 PM