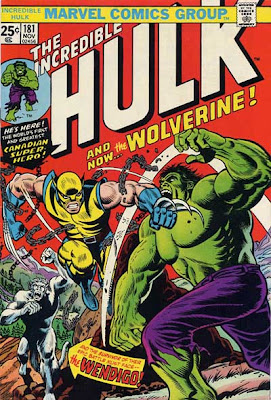 My girlfriend texted me while I was at work to let me know that the floor-plan for the upcoming Ottawa Comiccon was put online. Three guys I know are conveniently all sitting right beside each other, with some other guy named Herb Trimpe sitting between them. To which my reply was to exclaim out loud, "Herb Trimpe!" (which I then texted as well). I spend a lot of my time at comic conventions sitting around with friends who are there to draw sketches and sell books. Hence, I don't really like paying to get in to these things, 'cause sitting in artist alley with friends doesn't quite seem the over-inflated price of admission. Not anti-con, but I'm just cheap. I'd rather spend that cash that would've been spent on a ticket on comic books. So now I get to visit with friends while they sit beside the living legend who amongst other artistic accomplishments was the first artist to ever draw Wolverine. And I cannot lie, I will be using all my eek powers and luck skills in an attempt to get an old school Wolverine sketch to add to my collection. This geek weekend now has a mission.
Posted by batturtle at 11:59 PM