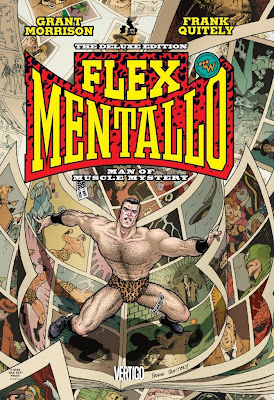 Finished reading Flex Mentallo last night, a hole in my Grant Morrison library that has somehow slipped by me all these years. The fancy new re-coloured collection of the Vertigo mini-series classic was an excellent excuse to finally give it a read. Even though I've been trying to save all my pennies for various other things and not buy too many new books, and instead catch up on the dozens of books that I already own and haven't read. Sometimes it's hard to resist the combo of a book you're dieing to read, especially when it's available at a greatly reduced price (curse you Amazon!).

Grant Morrison is hands down my favorite writer of any medium. When he's paired up with one of his most frequent artistic collaborators like Frank Quitely, he manages to reach an even more impressive level of comic book storytelling (see New X-Men, We3 or JLA: Earth 2 for proof of that).

Grant has two basic levels of writing. There's the amazing old school pantheon of the Gods monthly comic cliffhanger super heroics of JLA or All Star Superman, or there's the reality bending ethereal psychedelic bizarre mesmerizing contemplative confusion of The Invisibles or The Filth. The Charles Atlas comic strip inspired Flex Mentallo falls somewhere inbetween his two norms, as his Doom Patrol spin-off is bizarrely weird, and also falls into the super-hero genre. I don't always know what the hell is going on in Grant's more out there writings, but I am always enthralled. I think there's more thought and imagination and intelligence put into one issue of a Grant Morrison comic than years of issues of a lesser book.

Any time that the character of a comic appears on the cover of the first issue yelling "You! Buy this comic now or the earth is doomed!", you should buy that comic.

Posted by batturtle at 1:01 PM