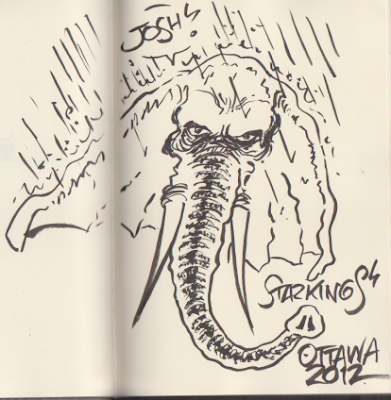 It's a different age for attaining comic con sketches than when I first started collecting them back in my youth in the early 1990's. It used to be a nice little interaction between fan and professional, they would draw a little sketch, you would have a treasure for life.

Now-a-days many artists charge for commissions, and very rightfully so. Drawing stuff is what these folks for a living after-all. I'll always remember Commander Rick on Prisoners of Gravity on TVO saying that if you were a fan of someone's bicycle shop you wouldn't expect a free bike from them, so why would one be shocked to pay for a comic book artist to draw something for them. So, I'm not complaining about that, merely pointing out that in years gone by the practice hadn't been instigated yet. Hence I was in the right place at the right time to get great pieces of work from the likes of John Romita Sr, Dale Keown, Charles Vess, amongst others. There's also a reasonable point made that jerk comic fans would get a free sketch and then sell it on ebay, there-by successfully ruining the fan / professional respect and bond.

None-the-less, thanks to a good attitude, possible geek mutant powers, and friendly connections, I still manage to snag a drawing here and there. The one I got at the Ottawa Comic Con yesterday was from comic book lettering legend, and fine writer and artist to boot, Richard Starkings. Richard has written a bit for comics such as Doctor Who, Superman / Batman and She-Hulk.

He is of course also one of the finest and most prolific letterers in the history of the medium, and one of the pioneers of computer based lettering and effects. His lettering work includes...well...pretty much everything from every publisher. And he is creator of the character Hip Flask from the comic Elephant Men, which he was kind enough to draw for me. Another fine addition to the collection, and more proof that a lot of non-artist comic book pro's seem to be very decent artists in their own right.

Posted by batturtle at 4:00 PM