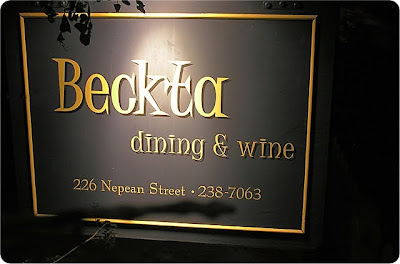 Got to eat a world class dinner at Beckta tonight. I've never been much of a photographer, I'll totally drop the ball if I ever bump into a Sasquatch or a UFO, so I neglected to take any photographic evidence of the delicious foods I got to eat. I can tell you that it was the best salad I ever had, followed by a great tofu main course and chocolate dessert. Actually, yeah, they were all under the category of 'best ever had'.

Plus, being that I'm a vegan, it was extra fun 'cause my meal was completely off the menu. Everything that was set before me to eat was a surprise.

To keep to the geek theme that I usually write about, I was even introduced to a new beverage. I don't drink, same for my friend, so she set me up with a beverage that she's fond of that co-workers intro'd her to. It's called a Darth Vader, which is a complete twist of fate happenstance that a drink that I now find so tasty is named after a Star Wars character. It's coke, juice and grenadine...that might sound gross at first, but it's great, like drinking candy. Hmmm...I guess some might think it gross to drink candy.

Places like Beckta are one of the many examples that I point to when someone might complain about Ottawa and I'm left to defend my town. You can't get this quality of establishment just anywhere.

I highly recommend that in your group of best friends, you acquire one that works at an awesome fancy restaurant, and then get them to organize a dinner for you. It makes you want to spend a lot more money on eating out, and follow-up meals the next day seem sub-par, but otherwise you can't go wrong.
Posted by batturtle at 11:17 PM