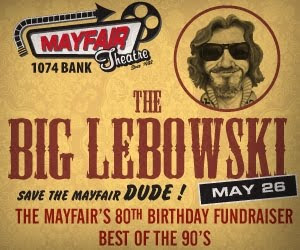 Tonight at the Mayfair we kick off our fundraising drive that will continue for the remainder of 2012. The long and short of it is that we need a new digital projector or come 2013 there aren't very many movies that we will be able to screen anymore. Many are sad about the death of 35mm projection, but at this point it is alas a lost battle.

Here are the glass half full aspects though: new projector means that we can continue to show new movies. If the digital switch-over was happening right now instead of in the near future, we wouldn't have been able to screen anything new, whether that be Midnight in Paris or The Muppets. The new digital projector will also make it possible to screen restorations that the studios are going to make available. I've heard of Universal fixing up their Universal Monsters classics, Disney finally opening up their classic animation vaults, and various modern classics like Ghostbusters and Jaws and Jurassic Park being re-released. And, we're not getting rid of the 35mm projector, we have a great big library of titles on 35mm, and know collectors with amazing libraries available for rental.

In the meantime, on top of your normal Mayfair visits, please do be sure to check out our patron suggested decades countdown. Thanks to popular demand, for the 90's we present The Big Lebowski. A well deserved pick for the best of the 90's, considering that for me it's a perfect movie. I could watch the Coen Brothers classic over and over and never get tired of watching guys argue in a bowling alley and strange musical number dream sequences. Tonight has the promise of Dude's and Walter's in costume, the chance to win a private screening at the Mayfair, and many an excellent prize to be raffled off. All money raised helps us buy the fancy DCP projector. The Dude abides.
Posted by batturtle at 11:33 AM