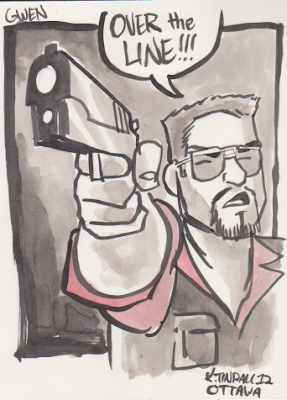 After having stayed up late at the roller derby after party, managed to still get up bright and early, have some bagels for breakfast and return for round two of some Ottawa Comic Con-ing. My girlfriend and I had Pro badges, what little power I'm afforded thanks to the Mayfair connection, and we Jedi mind tricked our accompanying friend past the line.

Attended a couple of panels, first up was Jamie Bamber from Battlestar Galactica, second geek celeb was Adam Baldwin from Firefly / Serenity. Both were fine public speakers who handled the Q&A with the utmost skill that all comic con attending actor's have learned to posess over the past few years. Bamber had some great stories at the initial fear to eventual friendship of Edward James Olmos. Baldwin told familiar stories of the genius of Firefly, and of working on Full Metal Jacket for Stanley Kubrick.

Got in some visiting with friends from local Ottawa publisher Mirror Comics. I have a couple of projects that I hope to be working on with them in the near future. The ideas are out there and have been discussed, now it's a matter of getting them out of my brain and typed into a computer. Also chatted with high school friend and two time San Diego Comic Con condo-mate Tom Fowler. Tom has recently drawn some stuff for Spidey spin-off Venom, a Jim Henson's Storyteller comic, and is currently in the trenches of drawing a big fat 100 page Hulk Season One comic.

Another talented friend, Kelly Tindall, was nice enough to draw a picture of Walter for my girlfriend after discussing her love of Roseanne and that Big Lebowski is a perfect movie. Then we found ourselves on an outside of the comic con adventure with Kelly. We sprinted from the con to his vehicle and pointed him in the direction of a local mall where he might grab some gifts for his wife in honour of mother's day. A book and some wine was found and mother's day was saved! A true comic con miracle.