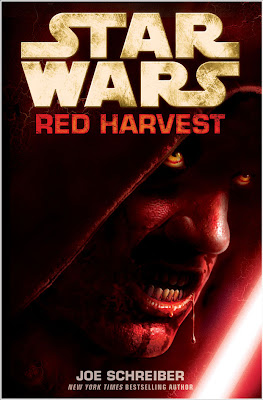 A while back I was loaned a couple of books. I'm always hesitant to borrow books, just because I am so behind on reading books that I have around the house, and I keep getting more comics and being lured into the library. My friend was insistent that I would thoroughly enjoy them though, and I took them home to add to my unread books stack.

When told about a book that crosses over the Star Wars universe with the zombie fad that's currently sweeping the land, the first thing that might come to one's mind is how stupid that sounds. In actuality, the mash-up works surprisingly well. A little while back I read Death Troopers, the first novel to make use of concept, and I enjoyed it quite a bit. To be fair, I am pretty much the ideal target audience for this type a thing, so mayhaps not the hardest sell.

The second Star Wars zombie book written by Joe Schreiber is titled Red Harvest (a tip of the hat to Blue Harvest, the fake working title for Return of the Jedi). This novel takes place in the Old Republic era, well over 3,500 years before Luke Skywalker and his friends blew up the Death Star. The story reveals the back-story of the zombie like inducing virus, and would be appealing to both science fiction and horror fans. In fact, the story is so self contained that it exists on it's own even for people not interested in the Star Wars galaxy. There's not a commitment of having to read another dozen books upon reading this one. It just happens to have lightsabres in it, has mentions of a thing called the Force and has good guys called Jedi and bad guys called Sith.
Posted by batturtle at 11:24 PM