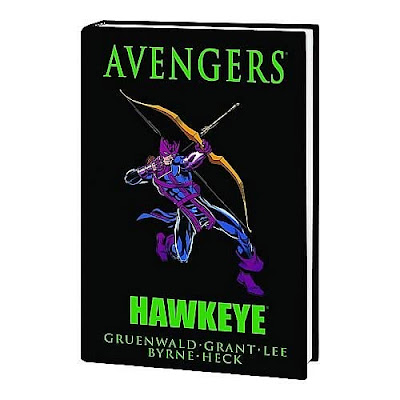 Finished reading the Avengers: Hawkeye collection that I picked up at the Ottawa Comiccon. I grabbed the book because:
A. - Hawkeye is cool.
2. - The book was on sale for a mere $5 bucks.
and C. - I may have still been on an Avengers are awesome high having only seen the movie the night before purchasing the book.

Being mainly a DC Comics boy, I have often teased Marvel fans about how most of their iconic characters are just modifications of DC heroes. Hence I've always said that Hawkeye is just a purple Green Arrow. To be fair, Green Arrow is just Robin Hood. It's the old argument of mythological inspiration vs plagiarism.

Accusations of the characters originality aside, I've always liked Hawkeye. When I was a kid, for some reason I loved the Hawkeye lead West Coast Avengers way more than the X-Men (then and now most popular super hero team). Maybe I was just being difficult, I also liked Sega more than Nintendo.

This is a good lil' collection featuring Clint Barton's first appearance, his first solo mini-series and an Avengers issue where he gets booted off the team and lands a job as a super-skilled security officer. The book really should have been called Hawkeye & Mockingbird though, as she is in the mini-series, her first appearence is included, and a Marvel Team-Up between her and Spider-man.

Reading these comics makes me want to see the Avengers movie again, even though they got rid of Hawkeye's awesome mask in favour.

Posted by batturtle at 4:29 PM