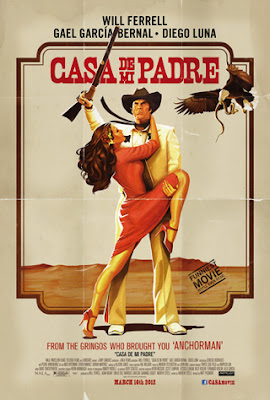 Went to see Casa De Mi Padre tonight, a film which is currently in the midst of making it's Ottawa premiere at the Mayfair. This style of comedy isn't for everyone, in fact I'd say it's safe to say that even many who consider themselves Will Ferrell fans will find the picture bizarre, off-putting and confusing.

I do enjoy bizarre, off-putting and confusing cinema though, and I thoroughly enjoyed this SNL alum Spanish-language telenovela style Mexican western. From the guns-a-blazing action to the creepy can't pull your eyes from the screen sex scene to the wonderfully horrible fake animals to the musical numbers...I was all in.

I appreciate when a big time movie star isn't afraid to take a pay-cut or take artistic risks away from the mainstream Hollywood safety. Casa De Mi Padre is both of those things for Will Ferrell, and I found that it paid off handily and hysterically.

The Mayfair has Casa De Mi Padre for two more nights, May 23 and 24, I highly recommend that you come and check it out. You will be in the great minority of cinema-goers who get that privilege, seeing as how few theatres in North America are carrying it. It's not going to make a lot of money in the grand scheme, but as per usual in these cases, that does not mean that it is not awesome.