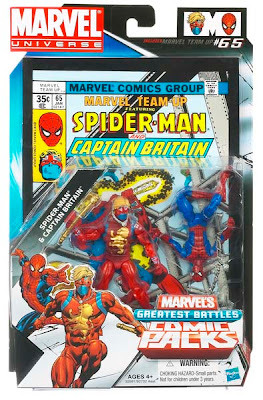 Starting tomorrow night at the Mayfair we'll start our highly anticipated Ottawa premiere of the new documentary Comic Con Episode IV: A Fan's Hope. It's the perfect film to watch in the days leading up to the first annual Ottawa Comiccon. The film was directed by Oscar nominee Morgan Spurlock, includes Stan Lee and Joss Whedon amongst it's producers, and features high caliber geeks the likes of Kevin Smith, Seth Rogan, Seth Green, Paul Dini, Grant Morrison and more.

On top of getting to watch a great documentary, if you come out to the Mayfair, you will also get a shot at winning some great prizes. The Comic Book Shoppe has supplied some comic and toys to give-away, including the pictured above toy adaptation of Marvel Team-Up # 65. I will do my best to remain professional and give the toys away to a deserved Mayfair patron, and not keep it for myself. I used to love Marvel Team-Up, and never in my wildest geek dreams did I think one day there would be an action figure made of Captain Britain and his weird-o 80's costume. If they make a Frog-Man toy my mind will really be blown.

Plus, our friends over at the aforementioned Ottawa Comiccon have kindly given us four free passes to their upcoming event. What other theatre rewards it's patrons so grandly? If you are a geek, and I know you are, be sure to check out Comic Con Episode IV: A Fan's Hope - May 4th, 5th, 6th, 9th and 10th - only at the Mayfair. As usual, the film we be presented in glorious 2D for your peak cinematic enjoyment.
Posted by batturtle at 4:36 PM