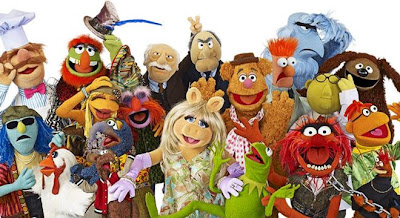 Over the weekend, a geeky friend of mine informed me that none other than The (actual) Muppets will be performing at the Just For Laughs comedy festival in Montreal in July. Even though I'm trying to save money for various things at any given time (like a trip to Hawaii or stacks of comic books), it didn't take a lot to sway myself to the conclusion that I had to attend. What makes it especially inciting is that it isn't a tour, it's a one-off special event.

I'm not exactly sure what the evening entails, but it is the Muppets on a stage, I think there might be skits, and I think that Kermit might be introducing human comedians. Then it hit me that I would be attending what for all intents and purposes is The Muppet Show (from a certain point of view). That made my brain explode with excitement a little. One of my very first memories is of watching the opening musical sequence to The Muppet Show on a little black and white TV. One of my earliest memories of gift receiving is of a Kermit from Santa on Christmas morning. Hence, the thought of being in the presence of Muppets just might fall under the dream come true category. Now let's just hope they don't sing Rainbow Connection...because that would equal me openly weeping in a public venue due to Muppets...well, doing that again.
Posted by batturtle at 11:23 PM