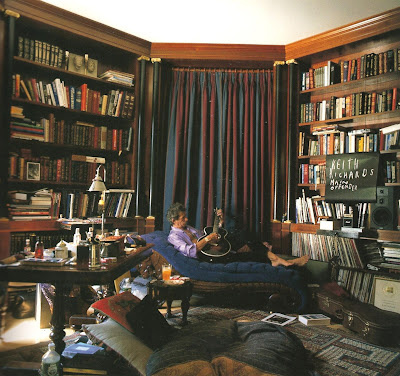 Finished listening to Keith Richards autobiography audio-book, Life. Especially because I walk all over the place, and because I hate letting go of an opportunity to multi-task, I love a good audio-book to listen to while I go about my travels.

It's not too shocking that Keith has an amazing story to tell, but mayhaps it is a little surprising how kind and endearing he manages to be amongst all the rock and roll icon sex, drugs, and rock n roll. He has quite the tale to tell and doesn't pull any punches, but pulls it off without sounding like a catty tell-all book.

When he dishes on Mick Jagger betraying the band with solo albums or that they're brothers but not friends, it's communicated with a great underlying sadness. The book is filled with tales of his youth, stories of working with his hero's, and the unbelievable turn of events that lead two kids to form and sustain the biggest and most legendary rock n roll band of all time. There's great stories about his friendship with The Beatles, run-in's with the law (including quite a Canadian connection), right up to The Stones being subject of a Scorsese doc and becoming a movie star in Pirates of the Caribbean. Speaking of, a large portion of the book is narrated by Johnny Depp. Alas he only bookends the work, being replaced by another voice actor for the middle chunk. That's a bit of a distraction and disappointment that Johnny couldn't make time to do the whole thing, but it's not a negative enough turn enough to make the piece not worthwhile to listen to.
Posted by batturtle at 7:43 PM