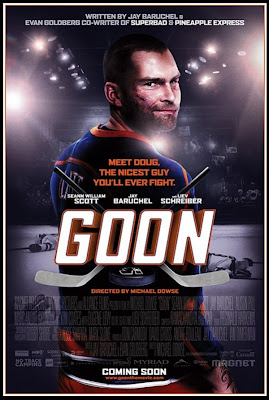 On Wednesday and Thursday night at 9:15pm at the Mayfair we're showing the new Canadian Content approved hockey movie, Goon. Everything that I've heard about this one is that it does justice to it's inevitable comparisons to Slapshot. I like that it's a distinctly Canadian movie telling a truly Canadian tale that isn't a bizarre bleak piece of cinema. It also showcases Canadian talent the likes of the director of Fubar and co-writer of Superbad and Pineapple Express, plus homegrown actors Jay Baruchel, Alison Pill and Eugene Levy.

Not that there's anything wrong with the weird and disturbing Canadian genre of film, I like David Cronenberg as much as the next film geek. It is nice though to present a view of our culture to the outside world that doesn't involve evil twin gynecologists or creepy bug monsters. Even if that culture in this case involves guys beating the hell out of each other while an adoring drunken public cheers them on in brutal gladiatorial combat. There aren't any Canadian teams left in the race for the Stanley Cup, so we at the Mayfair welcome all the saddened hockey fans into the theatre to partake in a big-screen theatrical version of a hockey night in Canada.
Posted by batturtle at 5:03 PM