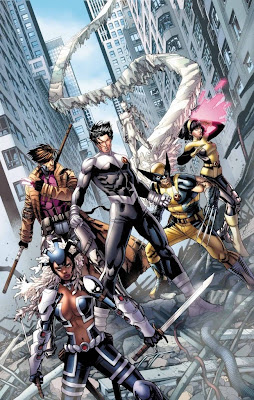 I got an excited text from a friend of mine, all a-buzz about the news that has hit the media that one of the X-Men was coming out of the closet and getting married. She is the same friend who confusingly texted me with a demand for the gay Catwoman. What she actually meant was that she wanted to check out the Batwoman comics featuring the lesbian central character under the cape and cowl.

It is note-worthy that Canadian super-hero Northstar has indeed proposed to his boyfriend and is getting married next month. What I had to explain to her, and what frustrates me with the media at large, is that this is not a new plot point that the character is gay. And it wouldn't be all that hard for journalists to also be knowledgeable of this fact if people of their profession still partook in the simple act of research. I mean, it's not like they even have to go to a library or crack open a book or make a phone call to Marvel Comics. Just type the word Northstar into Google and you'll find all the back-story that you need on the character.

Northstar being gay is not new. John Byrne, co-creator of the character and original writer / artist on Alpha Flight has said that the character has always been gay, they just couldn't get away with saying so in the late 70's and early 80's. In fact, the character has been out of the closet for a whole two decades...so despite the media thinking it the utmost of controversy and a couple of anti-gay groups being irate, it's not exactly big news for us geeks that there is a gay X-Man.

Comics have a history of and continue to be a genre that even in it's most mainstream of offerings manages to be accepting of all kinds. Whether it be The Thing's Jewish heritage or a gay character being so popular that he gets his own series from Archie Comics, comics embrace one and all. I take great pride in comic books for doing so, and feel great disgust that there are still people out there who think that a comic book featuring a gay super hero will be the downfall of humanity. I will buy Astonishing X-Men #50 and #51 if only to piss off those people.

Posted by batturtle at 2:24 PM