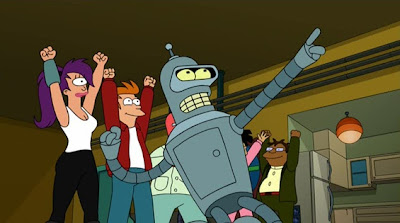 I somehow missed out on the fact that a second half of a sixth season of Futurama appeared on television between June and September of 2011. I don't have actual cable TV (does anyone have cable TV anymore? If so I can;t imagine why) but none-the-less I'm surprised that these episodes slipped by me.

As soon as I found out of their existence, I caught up with them at super-speed. I pretty much dropped everything and got all caught up on my cartoon-ing. Now I want more! Luckily, the new season is on the horizon, premiering in July. Futurama is a great success story upon it's come-back, more pretty definite proof that TV ratings are consistently in error, and that people in power in that industry clearly don't know what they're doing (especially Fox it seems). Most importantly, the new episodes stand shoulder-to-shoulder in quality with the original batch of episodes from the late 1990's to 2003. If there's any justice it will have as long as The Simpson's and be around for a couple more decades at least. Thanks to dvd / blu ray sales and the advent of the Netflix style of entertainment distribution, it won't even matter how dumb TV executives are, we'll hopefully have Futurama's as long as the creators want to keep making them.
Posted by batturtle at 5:47 PM